A mysterious “magic island” has appeared out of nowhere in radar images of a hydrocarbon sea on Saturn’s giant moon, Titan. Scientists are struggling to explain the bright “transient feature” but say it could be the result of waves, bubbles or buoyant solid matter. The object was spotted by flipping between images of Ligeia Mare, Titan’s second-largest sea, captured by the Cassini space probe that has been exploring the Saturnian system since 2004. Prior to July 2013, the sea had appeared flat and completely devoid of features, including waves.

This discovery tells us that the liquids in Titan’s northern hemisphere are not simply stagnant and unchanging, but rather that changes do occur. We don’t know precisely what caused this ‘magic island’ to appear, but we’d like to study it further.

The enigmatic object, dubbed “magic island” by scientists, suddenly materialised—only to vanish away in later images. Titan is the only planetary body in the solar system besides Earth known to have large expanses of liquid on its surface. But unlike on Earth, they do not consist of water. Titan’s seas, the size of Earth’s Great Lakes, are formed by flowing rivers of liquid methane and ethane. Essentially, they are made from lighter fuel. Details of the “magic island” discovery are published in the journal Nature Geoscience.

Likely, several different processes—such as wind, rain and tides—might affect the methane and ethane lakes on Titan. We want to see the similarities and differences from geological processes that occur here on Earth. Ultimately, it will help us to understand better our own liquid environments. 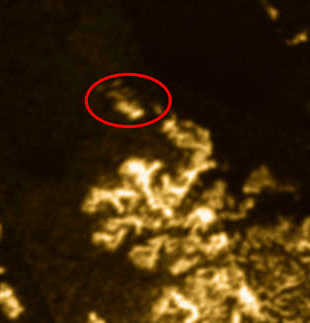