A vast crater discovered in a remote region of Siberia known to locals as “the end of the world” is causing a sensation in Russia, with a group of scientists being sent to investigate. The giant hole in the remote energy-rich Yamalo-Nenetsky region first came to light in a video uploaded to YouTube that has since been viewed more than seven million times. “The crater is enormous in size – you could fly down into it in several Mi-8s (helicopters) without being afraid of hitting anything,” the person who posted the video, named only as Bulka, wrote.

It most likely happened when pressure went up in some cavity containing deposits of marsh gas (methane).

The crater has a diameter of around 40 metres on the inside and 60 m on the outside. It’s located in the permafrost around 30 km from a huge gas field north of the regional capital of Salekhard, roughly 2,000 km northeast of Moscow. Its appearance prompted conspiracy theories and speculation that it may have been caused by something otherworldly, with some even suggesting aliens might be behind it. Initial theories suggesting the crater was caused by a meteorite, however this was dismissed by scientists.

It’s deadly dangerous to go close because the sides of the raised mound around it constantly cave in.

Andrei Plekhanov, a senior researcher at the state Scientific Centre for the Study of the Arctic 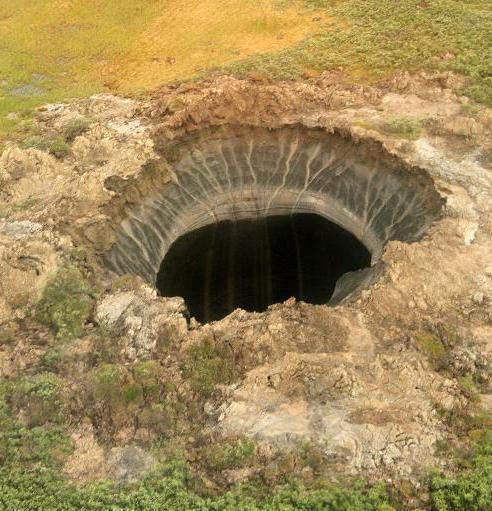