Three people were injured when a gunman opened fire at the Florida State University campus in Tallahassee on Wednesday night, before the shooter was later killed by campus police. According to reports, the gunman opened fire inside the university’s Strozier Library. Two of the shooting victims were taken to Tallahassee Memorial Healthcare — one was in critical condition; the other in stable condition, said hospital official Stephanie Derzypolski. The gunman was killed after campus officers asked him to drop his weapon, and he opened fire at them.

An alert issued by Florida State University to students

One student, Allison Clarke-Hall, told the publication she was in her room when the shooting happened. She said she heard “eight to 10 gunshots in a row” coming from the library. “The first thing that I thought was you never think that this is going to happen to you,” she said. Student journalist Perry Kostidakis told BuzzFeed there were about 50 police vehicles on the scene from 1:20am local time. He said all campus buildings remained on lockdown and some students were still inside the library. 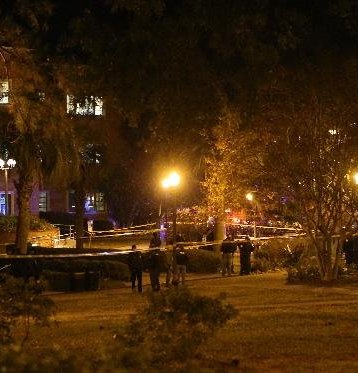