'We're at the comet': Space probe prepares to beam back pictures to Earth

A probe launched in 2004 to chase a comet billions of miles around space has today made contact with Earth after reaching its target. Launched in March 2004, the Rosetta probe’s odyssey has already taken it four billion miles across the asteroid belt and more than five times the Earth’s distance from the Sun. It has now reached its quarry, comet 67P/Churyumov-Gerasimenko, a lump of ice and dust and travelling around the Sun at around 34,175 mph. “We’re at the comet,” declared Rosetta’s flight operations manager, Sylvain Lodiot.

When we started this mission, we assumed that the comet was spherical like a football but as we’ve got closer and closer we saw that ‘hang on a minute’ it’s shaped like a duck.

In the last few days, Rosetta has captured images of the strange comet that have already thrown up some surprises for scientists. During its journey, Rosetta has looped around the Sun five times, and picked up speed from three “gravity-assist” swing-bys of Earth and one of Mars. Information from the mission will help scientists understand the origin of comets, the Solar System, and possibly life. In November, Rosetta will deploy a small robotic lander, Philae, which will steer itself to the comet’s surface. It will do this by shooting harpoons into the 2.5-mile dirtball before the lander docks on the surface - a move that has never been attempted before. It will send back images and conduct the first in-situ analysis of a comet’s composition. 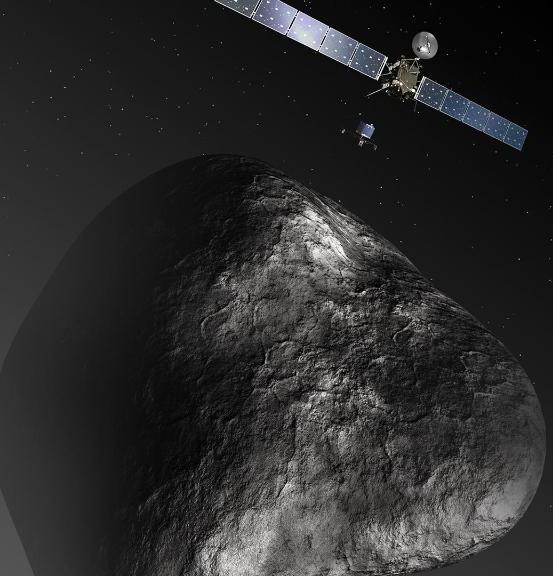