Officially, the FBI agents who swarmed Donald Ray Morgan at Kennedy Airport this month were there to arrest him on a mundane gun charge. But they whisked him away to their Manhattan office and grilled him for two hours on an entirely different topic: Islamic State extremists. Over and over, they asked Morgan, a 44-year-old North Carolina man, converted Muslim and author of pro-extremist tweets, whether he had traveled to Syria to support the militant group. More important, they wanted know whether he could identify any fighters with U.S. ties who had left the region to return to America.

To the brothers inside Syria and Iraq, be humble and grateful. Many of usare trying to come. Some are arrested and others are delayed…Honestly, can we not kill one piece of crap Zionist?

The two hours of questioning, recounted in a recent court hearing, offered a glimpse into U.S. law enforcement’s intensifying efforts to identify Islamic State sympathizers who could help export the group’s brand of violent jihad to the United States. They come amid a new barrage of U.S. airstrikes against the Islamic State group that beheaded American journalist James Foley. The group called Foley’s killing revenge for previous strikes against militants in Iraq. Federal and New Police York Department officials have estimated that at least 100 Americans could be fighting with the Sunni extremists who have seized territory in northern and western Iraq. In April, a Colorado woman and convert to Islam was arrested before she could travel to Syria to marry a fighter she had met online. More recently, a Texas man who was arrested trying to board a flight to Turkey pleaded guilty to terror charges alleging he wanted to join the group.

Anyone who would be willing to join a group like that is leaving the principles of their faith if they call themselves a Muslim. 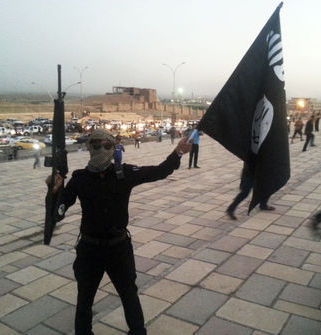